Maybe I named this blog a little preemptively. Although I specialize in knitting and crocheting plushies, I also like to do various other crafts. One of these includes cooking. From here on, I think I’ll call this blog Val Crafts. (ValCraft was taken by some real estate site.) This way, people know to expect more than just plushies. It’s useful to be a jack (or jill) of all trades! Er… crafts.

I had the house to myself yesterday, and had a craving for strawberry milk and chocolate cake. Everyone else hustling and bustling woke me up early, so I figured an early breakfast was in order. There’s something satisfying about waking up early, and successfully making the exact breakfast you’re craving. Maybe one day in the future I can make one for K. :3 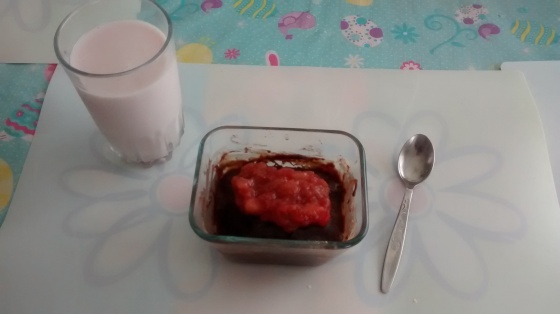 Tastes better than it looks, I promise!

I found this recipe in the YouTube comments while looking for a new microwave chocolate cake recipe. I tried making microwave cake before, but it came out very dry, and because the recipe contained egg it was really difficult to clean the container afterward. I was looking forward to trying this new video recipe until I saw the comment saying that the cake in the video was no better. The person’s recipe was also a lot simpler and had a lot of likes, so I figured I’d try it out, instead.

And now, without further ado, let’s try this recipe:

Toss everything in a microwave safe container and mix well.

It felt a bit too sticky, so I added another 1/2 teaspoon of milk.

Realized now I forgot to put in the vanilla and salt. Whoops!

Anyway, microwave everything for 1 minute.

It was still a bit too soggy, so I put it back for another 30 seconds.

Yes, that’s homemade strawberry milk. I used the remaining strawberries as a topping for the cake. Hey, don’t waste food!

Verdict: Nice and fudgy, not dry at all. However it’s also very rich, so it would’ve been nice to have whipped cream on hand. In fact, it felt more like eating a…. BROWNIE! 😀 And even though I forgot the vanilla and salt, it still tasted pretty good, but next time I’ll try not to be so negligent. Maybe it turns out even better when you add the vanilla and salt? 😀

*IMPORTANT: Make sure the batter isn’t too smooth and runny, or else you’ll end up with dry cake.

Back to knitting and crochet at last: my wrist is feeling better! It’s just too bad I’ve been using it to make this cute sweater I found on the Red Heart website. Dangit, Valerie, get yo ish together, Mr. Drippy still doesn’t have his lantern!

….whoops… was that a spoiler?

Ah, well, I’m going back to the sweater. The goal is to have a pretty new outfit by next week!

Owwie… that Toothless plush really did a number on my wrist. This week, let’s take a break and just chat. In fact, let’s make a throwback to a plushie made from someone else’s pattern: Kirby!

Before we go into some rambling, I’d like to take a moment to mention that I’ve made a new deviantART account! I will be posting more frequently on dA, (pics only) so if you like what you’ve seen on this blog so far, please give my page a +watch! 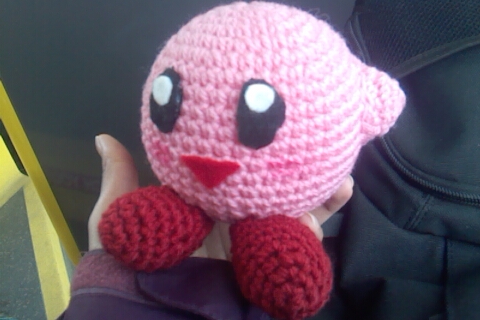 My hand makes a nice chair.

In case you didn’t know…

Kirby is a pink puffball who goes on journeys that typically entail restoring the balance of Dream Land.  He has the ability to swallow enemies and copy their powers. When he copies powers, he wears hats representing said power.

So about this Kirby…

This is the Kirby I made for my friend. Let’s call him East. I haven’t known him very long, but I find him special all the same.

I met East early in this school year. While he was waiting to ask the TA a question, he was talking to my friend named Puff. I went up to hug Puff, and East saw me and said, “hey, you hug everyone else, I want a hug too!” I liked East’s hug, because he’s squishy like a teddy bear. XD

This was especially so now, in second semester, because in the winter, I lost my “huggle buddy” in the mountains. It made me feel very empty inside. But when hugs can mean so much from someone you don’t know very well, maybe it’s not such a big deal? I don’t know.

What I do know is, I was happy to make this for East, especially when I saw how happy he was to receive it. We used the money from the Kirby sale to buy fries for each of us. When he was studying for the exam that day, he put Kirby on his bag and said, “Kirby’s watching me study.” Now I’m making a plushie for his girlfriend! What is it you ask? Well, you’ll just have to find out another time. 😀

Finished Kirby on the bus.

That concludes this week’s very short post.  This was meant to be a lot fancier. Fancy how? Again, that’s in the future. For now, I think it’s time to add more things to the shop and take pictures of that aforementioned plushie for the Lady of East. (Hahaha, see what I did there? :P)

How to Train Your Dragon 2 is now in theaters starting today! In honour of that, I’ve whipped up a little buddy to take along to the theater.**

Uhnf… Making your own patterns is a lot tougher than I thought it would be. A lot of improvisiong went into this little guy, and I’m yet to find out if double crochet would’ve made him turn out bigger, or sped up the creation process. But I think it’s totally worth the struggle of making your own plushie pattern when the end results turn out cute!

Sure, he’s not quite like the real thing, and I didn’t want to put the skull on his red tail until the glue dried. I got lazy and didn’t feel like sewing more felt to wool, which I don’t like to do anyway.

I sewed his legs loosely so that he could stand or lie down. His wings are made with felt so that it’s easy to roll him up and ship him out. For now he is going to sit in my bag, waiting to go see himself in the theater. :3

Awesome news part the second: after two weeks of limbo, my Etsy shop is finally up and running! This will be my first time running my own business of sorts. There isn’t much there at the moment, save for the Pokeball earrings. I will add things to the shop as requested. I get the feeling I will end up selling mostly earrings. Please bear with me as I figure out what goes where!

On that note, let me say that yes, I do accept requests! If you are reading this and thought of a character or object you’d like to see made into a plushie, comment below!

Toothless looks like he has no legs when he’s lying down.

**Disclaimer: I am not affiliated with Dreamworks Animation. This is purely a fan-made pattern, created by me.

So I did something really dumb this past weekend.

He says he forgives me, but I thought, “there has to be a better way to make it up to him.” I remembered the amigurumi panda he had hanging in his car, but it looked more like a sad puppy than a panda. I thought, “lawl I can do better than that.” That’s when I had the idea for this week’s blog:

Ah-ma-goo-roomie! (At least that’s what it said in the book way back when…) It’s a Japanese style of “crochet/knit stuffed doll.” They are just cute knit or crochet dolls. They can be of any character, animal, or even inanimate objects! There isn’t much to the technique: all you do is single crochet in rounds, without joining said rounds, so as to create a spiral texture.

Let’s make our first amigurumi together. We’ll start simple with the first plushie I learned to make: a little teddy bear. Teddy bears are timeless, which makes them great first projects and gifts! They’re also very easy because you can make one using any size crochet hook, any weight of yarn, and any colours you want. In fact, let’s add a twist: this bear will be a panda, and instead of sitting upright, he is being lazy.

This little guy is quite content to sleep on your pillow, couch, or any spot associated with relaxing. Or you can give it to your friend in the event that one of you sleeps through plans. 😛

Edit [07/07/14]: Sorry, I’ve taken this pattern down. I’d rather keep it to myself as a secret. 😛 Until then, I hope you enjoy the cuteness of Mr. Panda! Please keep following my blog for weekly doses of cute, and other DIYs! 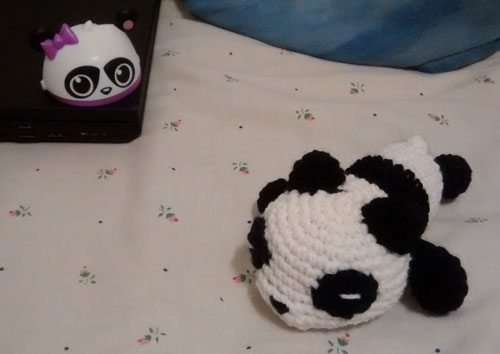 I put on my nice bow for this?!